The Alternate TV Wiki
Register
Don't have an account?
Sign In
Advertisement
in: MyNetworkTV affiliates, Television stations in Fresno, California, Television channels and stations established in 1961,
and 4 more 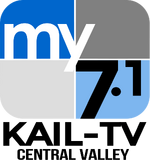 My 7.1 (primary)
My Central Valley (secondary)

MY Place for TV

Dorado Media Group
KAIL, virtual and VHF digital channel 7, is a MyNetworkTV-affiliated television station licensed to Fresno, California, United States. The station is owned by the Dorado Media Group, as part of a duopoly with CW affiliate KFRE-TV (channel 59). KAIL maintains studio facilities located on Shaw Avenue in Fresno, and its transmitter is located in Meadow Lakes in rural northeastern Fresno County.

The UHF channel 53 allocations in the Fresno market was originally licensed to KBID-TV, which operated for a few months in 1954. The station was owned by veteran broadcaster John Poole, the original owner of KBIC-TV in Los Angeles (whose channel 22 allocations is now occupied by Spanish independent station KWHY-TV). KBID ceased operations when the station was unable to acquire a network affiliation. At the time, CBS was the only U.S. broadcast network the did not have an affiliate in Fresno. The network would eventually affiliate with KFRE-TV (channel 12, now ABC owned-and-operated station KFSN-TV on channel 30) when that station signed on in May 1956.

The station first signed on the air on December 18, 1961, originally broadcasting on UHF channel 53; it was the first independent station to sign on in the Fresno market, beating eventual competitor KICU-TV (channel 43, channel allocation now occupied by KGMC) to the air by five days. The station holds the record for the longest continuous use of the same call letters in the Fresno market, having used the KAIL callsign since its sign-on; it has held the record since 2000, when KJEO-TV (channel 47, which signed on under those call letters in September 1953) changed its calls to KGPE (several other stations have had the same call letters since their original licensing, but signed on after KAIL made its debut); it is also the only station in the market and one of the few commercial television stations in the United States that has had the same ownership throughout its history, and is the only Fresno station that is independently owned.

In its early years, KAIL produced a sizeable amount of its own programming; among them included the children's program Leebo the Clown. During the 1960s, KAIL ran a mix of religious and public affairs programs, a few older syndicated programs, some cartoons, classic movies and some sports events. The station originally broadcast for about eight hours a day.

During the 1970s, KAIL ran older cartoons, drama series, several hours a day of religious programs, and specialty programming. As newly syndicated cartoons became abundant during the mid-1980s, the station added more of these programs to its schedule. Channel 53 also continued to lean toward carrying barter syndicated programs. The station's ratings continued to be rather modest throughout the 1980s.

On January 16, 1995, KAIL became a charter affiliate of the United Paramount Network (UPN); the station maintained a schedule resembling an independent during its first three years with the network as UPN would not carry a week's worth of programming until 1999 (even at that point, the network had no weekend primetime programming). During the 1990s, KAIL added stronger programs to its schedule, including recent off-network sitcoms, talk, reality and court shows. The station began gradually phasing out cartoons from its schedule around 2000 and dropped them from the weekday lineup altogether in August 2003, when UPN discontinued its children's program block, Disney's One Too.

On February 22, 2006, News Corporation announced the launch of a new "sixth" network called MyNetworkTV, which would be operated by Fox Television Stations and its syndication division Twentieth Television. MyNetworkTV was created to compete against another upstart network that would launch at the same time that September, The CW (an amalgamated network that originally consisted primarily of UPN and The WB's higher-rated programs) as well as to give UPN and WB stations that were not mentioned as becoming CW affiliates another option besides converting to independent stations. KFRE-TV (channel 59, no relation to what is now KFSN-TV) took the CW affiliation; KAIL, meanwhile, signed an affiliation agreement to become MyNetworkTV's Fresno affiliate. The station became a charter affiliate of the network when it launched on September 5, 2006.

KAIL-TV shut down its analog signal, over UHF channel 53, on June 12, 2009, the official date in which full-power television stations in the United States transitioned from analog to digital broadcasts under federal mandate. The station's digital signal broadcasts on its pre-transition VHF channel 7.

Though it no longer carries a newscast, KAIL produces a local daily morning talk show, hosted by Austin Reed. My ConVersation airs weekdays from 10 a.m. until 10:30 a.m., directly after Access Hollywood. The program is taped in front of a live studio audience at the KAIL studios and features local business owners, non-profit groups, and community members.