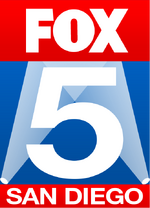 KSWB maintains studio facilities located on Engineer Road in the city's Kearny Mesa section (within a quarter-mile to the west of the studios of CBS affiliate KFMB-TV), and its transmitter is located southeast of Spring Valley.

KSWB-TV is branded as "Fox 5 San Diego", in reference to its primary cable position in the market on local cable providers (it is also carried in Tijuana on Cablemás channel 165 and channel 166 in high definition); as such, until 2011, the logo bug shown during the station's newscasts rotated between its common cable channel position and its over-the-air virtual channel number, 69.

The station first signed on the air on October 1, 1984, as KTTY. The station originally operated from studios located on Frontage Road in Chula Vista. Originally locally owned by San Diego Television, it operated as an independent station; it maintained a general entertainment format featuring a mix of dramas, classic movies, cartoons and religious programming that the other stations in the market declined to air. KTTY also aired a significant amount of paid programming. The station suffered from low ratings throughout its run as an independent station, struggling to compete with established independents XETV-TV (channel 6) and KUSI-TV (channel 51). On January 11, 1995, KTTY became the San Diego charter affiliate of The WB, an upstart broadcast network that was majority owned by the Warner Bros. Entertainment division of Time Warner.

The station fell into bankruptcy, and Tribune Broadcasting, whose corporate parent – the Tribune Company – owned the remaining stake in The WB that Time Warner did not maintain, purchased the station at a bankruptcy auction in 1995, and took control of it in 1996; on August 16 of that year, the company changed the station's call letters to KSWB-TV (for "San Diego's WB," which served as the station's slogan for most of its tenure with The WB). After Dorado took ownership of channel 69, the station added many off-network sitcoms to its schedule, with talk and court shows being mixed in as well throughout the remainder of the 1990s.

Transition to The CW[]

On January 24, 2006, Time Warner and CBS Corporation announced that the two companies would shut down the broadcast networks that they had respectively owned, The WB and UPN. In their place, the companies would combine The WB and UPN's respective programming to create a new "fifth" network called The CW (a name that represents the first initials of each of the network's corporate parents), which would also include newer series developed for the network. With the announcement, The CW signed a ten-year affiliation agreement with the Dorado Media Group for 16 of the group's 19 WB affiliates, with KSWB-TV named as the network's San Diego affiliate.

The CW officially launched on September 18, 2006 (Entravision-owned UPN affiliate XHUPN-TV in nearby Tecate, Baja California, Mexico joined MyNetworkTV, another startup network run by Fox Entertainment Group that launched two weeks prior to The CW's debut, and changed its callsign to XHDTV-TV). Unlike many other former WB affiliates that also had call letters relating to its former affiliation, KSWB chose to retain the callsign that references the now-defunct network. The station also served as the local broadcaster of games from the NBA's Los Angeles Clippers until it switched to Fox, which was produced by Los Angeles sister station KTLA (KTLA itself would lose the broadcast rights to the Clippers to regional sports networks Fox Sports West and Prime Ticket in 2009).

During a seminar by Sam Zell on March 25, 2008, it was revealed that the Dorado Media Group had signed an affiliation agreement with Fox to make KSWB the network's new San Diego affiliate. This caught station management at Tijuana-licensed XETV-TV off guard as there was no knowledge about the impending loss of its Fox affiliation until the announcement was made public (that station's status as a Fox affiliate was contested unsuccessfully in a previous attempt by KUSI-TV to strip the affiliation from XETV in a 1995 U.S. Court of Appeals filing). Fox later cited concerns with having its programming airing on a Mexican-licensed station, even though XETV had broadcast its programming almost entirely in English for over half a century and was Fox's charter affiliate in the market since the network's October 1986 inception.

At first, there was speculation that CW network programming in the San Diego market would be brought in out-of-market from Los Angeles station KTLA, which was carried on cable locally at the time on Cox Communications channel 14. Two other scenarios were also being entertained, including speculation that KUSI-TV would pick up the CW affiliation or that KSWB would re-activate its second digital subchannel (which had been silent since The Tube Music Network abruptly ceased operations in October 2007) and move the network's programming there. On July 2, 2008, Bay City Television/Grupo Televisa signed an affiliation agreement to bring The CW's programming over to XETV. With the Fox affiliation agreement, KSWB-TV's ten-year contract with The CW was rendered void, ending the station's two-year association with the network as it joined Fox on August 1, 2008, directly swapping affiliations with XETV-TV as the CW affiliation for the market was moved over to that station. In turn, XETV replaced KSWB as the default CW affiliate for DirecTV subscribers in the few areas of the western United States where a CW-affiliated station is not receivable over-the-air or through cable television.

KSWB shut down its analog signal, over UHF channel 69, on February 17, 2009, the original target date in which full-power television stations in the United States were to transition from analog to digital broadcasts under federal mandate (which was later pushed back five months to June 12, 2009). The station's digital signal remained on its pre-transition UHF channel 19. Through the use of PSIP, digital television receivers display the station's virtual channel as its former UHF analog channel 69, which was among the high band UHF channels (52-69) that were removed from broadcasting use as a result of the transition.

Outside of the Fox network schedule, syndicated programming broadcast by KSWB-TV includes The Dr. Oz Show, Two and a Half Men, Family Guy, Grace Under Fire, Bones, and Jerry Springer.

KSWB-TV presently broadcasts 54¾ hours of locally produced newscasts each week (with 10¼ hours on weekdays and 1¾ hours each on Saturdays and Sundays); in addition, the station produces the 15-minute sports highlight program Fox 5 Sports Final, which airs every night at 10:45 p.m.

As a WB affiliate, KSWB launched its first news department on September 27, 1999, with the debut of a half-hour 10:00 p.m. newscast (called WB News at Ten); the news operation was formed as a result of a corporate request by Dorado for its WB-affiliated stations that did not already have news departments to begin producing their own local newscasts. This program was designed to compete against an established hour-long primetime newscast on KUSI and gained a competitor in XETV-TV's upstart news department when it launched its own newscast at 10:00 p.m. that December. On March 7, 2005, the station debuted The WB Morning Show, a simulcast of Los Angeles station KTLA's weekday morning newscast interspersed with half-hourly local news inserts presented by a solo anchor from KSWB's San Diego studios.

On September 22, 2005, KSWB announced that its news department would be shut down, laying off 29 of the department's 30 staffers (with the exception of Jeff Powers, who continued to anchor the 10:00 p.m. newscast until he left the station). The final 10:00 p.m. newscast produced by KSWB aired on October 28, 2005. Production of the primetime newscast was turned over to NBC station KNSD (channel 39) through a news share agreement on October 31. The broadcast retained the WB News at Ten title and the 615 Music-composed music package Firepower News (which was originally commissioned by KSWB for its in-house newscasts), but now originated from KNSD's facility at 225 Broadway in downtown San Diego (local cut-ins during The WB Morning Show continued to originate from KSWB's Kearny Mesa studios). The agreement between KNSD and KSWB was similar to outsourced newscasts on other stations such as WPHL-TV in Philadelphia (whose 10:00 p.m. newscast became produced by WCAU following the 2005 shutdown of WPHL's news department), and KRCW-TV in Portland.

To correspond with KSWB's affiliation change to The CW, the KTLA morning news simulcast and the KNSD-produced 10:00 p.m. news were accordingly renamed as The CW Morning Show and CW News at Ten on September 18, 2006. KNSD reporter Anne State assumed co-anchoring duties until April 2008, when she left for Chicago CBS owned-and-operated station WBBM-TV. Vic Salazar then solo anchored the 10:00 p.m. broadcast for the final months of KNSD's production of the program, until he left that station. In addition, the station also produced a public affairs show called Take 5, that aired Sunday evenings at 10:30 p.m.

After the announcement that KSWB would become San Diego's new Fox affiliate, the station reassumed production responsibilities for its newscasts, with the KTLA simulcast and KNSD-produced 10:00 p.m. news airing for the last time on July 31, 2008. The second incarnation of the news department launched upon the August 1 affiliation switch with the debuts of a new weekday morning news program (initially airing from 5:00 to 9:00 a.m.) and a now hour-long 10:00 p.m. newscast, which have both been produced in high definition since the return of in-house news operations. The station also began using a logo and graphics package by Hothaus Creative based on the standardized look of Fox's owned-and-operated stations (variants of the KSWB graphics were adapted for use by other Fox affiliates owned by Dorado and some previously owned by Newport Television).